Penny Sparrow Bio: she was a Former Real Estate agent and Convicted racist, who rose to infamy after describing black people as monkeys in a Facebook post in 2016.

She posted on Facebook her frustration on the state of the beach in Durban after a New Year’s Day 2016 holiday.

She specifically said Blacks had horribly littered the coastline, making it a huge discomfort to other people, especially the environment. 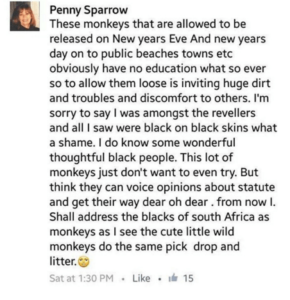 Her Facebook read: “These monkeys that are allowed to be released on New Year’s Eve and New Year’s day on to public beaches, towns, etc obviously no education what so ever so to allow them loose is inviting huge dirt and troubles and discomfort to others.

I’m sorry to say that I was amongst the revelers and all I saw were black on black skins what a shame, I do know some wonderful and thoughtful black people.

This lot of monkeys just don’t want to even try. But they can voice opinions and get their way. She went on to add: From now on, I shall address the blacks of South Africa as monkeys as I see the cute wild monkeys do the same, pick and drop litter.”

Soon after she posted it, the post went viral as other users called her comments racist. It was pointed out to her that Black People should never be described as monkeys.

Her daughter Cowie confirmed that her mother had died on 25 July 2019 after a prolonged battle with colon cancer.

Penny Sparrow had moved around the country during the last few years of her life while fighting cancer, to avoid being located by an angered South African public.

Cowie appealed for privacy while her family was in mourning. “We have been through so much through all of this, and we are struggling… she was my mom